A little stir fry and noodle base, like all the other swooshes, topped with griddled lamb fillets, sliced when cooked and glazed with hoisin sauce.  Easy! 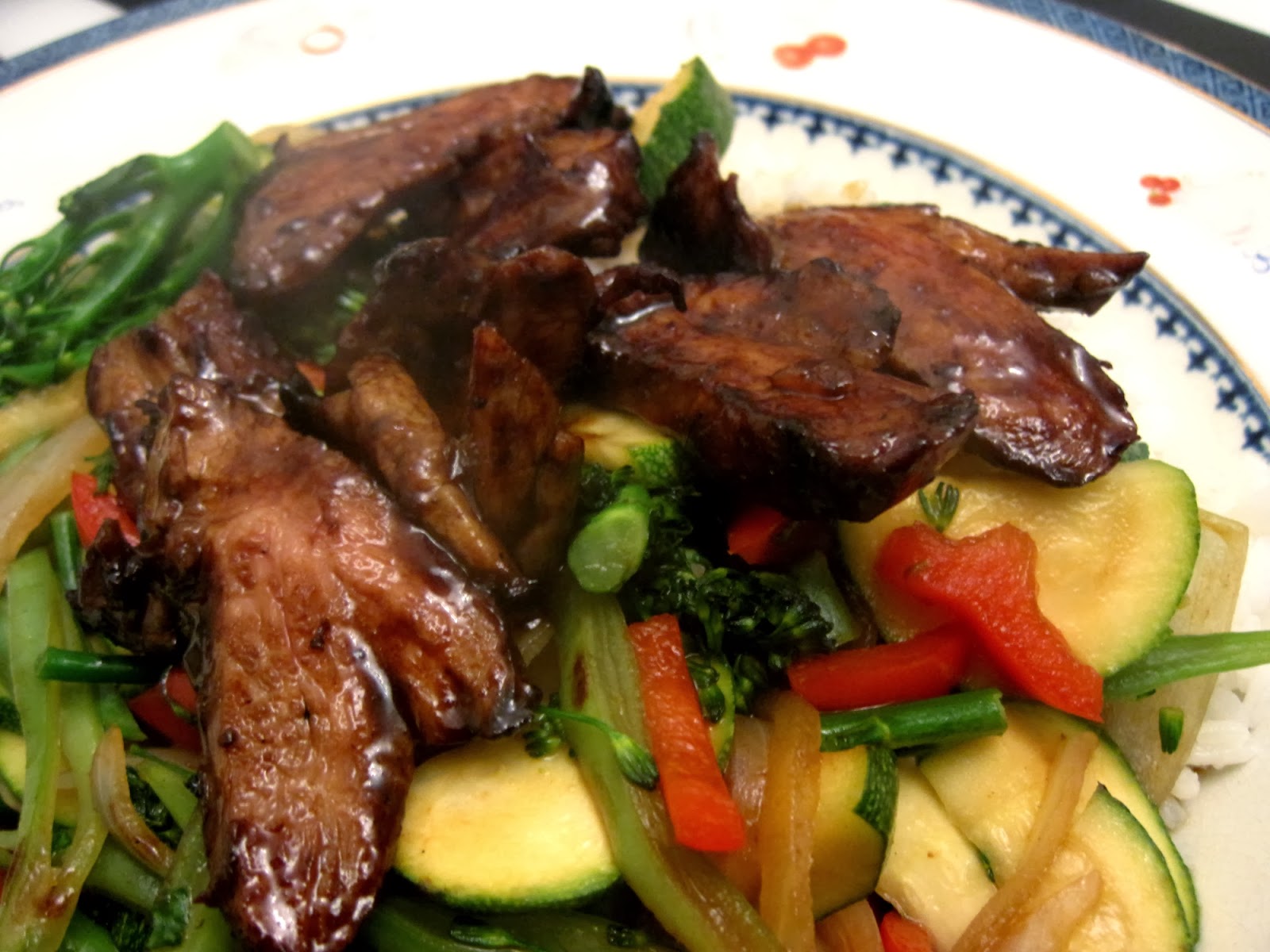 Posted by josordoni at 18:36 No comments:

This isn't a very authentic Thai curry so please don't tell me off. It is just dinner.... 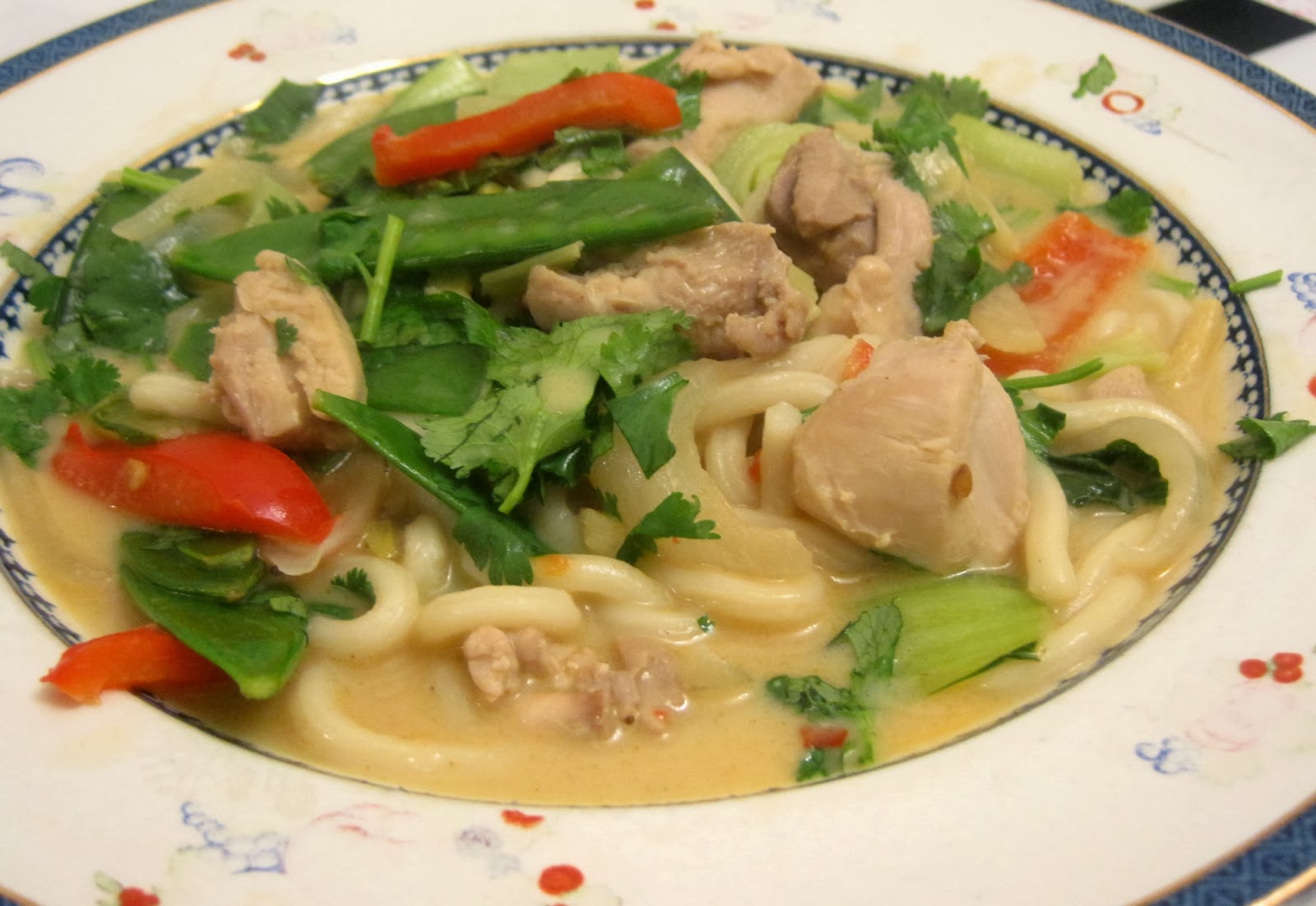 It's quick and its easy. Best to do all the prep first for this as it takes so little time.

In a saucepan put:

bring to a simmer and add the chicken, simmer for 10 minutes. Add the vegetables and noodles. Simmer for another couple of minutes. Pour into bowls and top with chopped coriander.

Posted by josordoni at 17:49 No comments:

Sushi rice doesn't just have to kept for sushi, it is lovely hot. Quite sticky, and very flavoursome.  This meal was so fast and easy, and I'd forgotten how good it was. It will certainly be a favourite again I think. 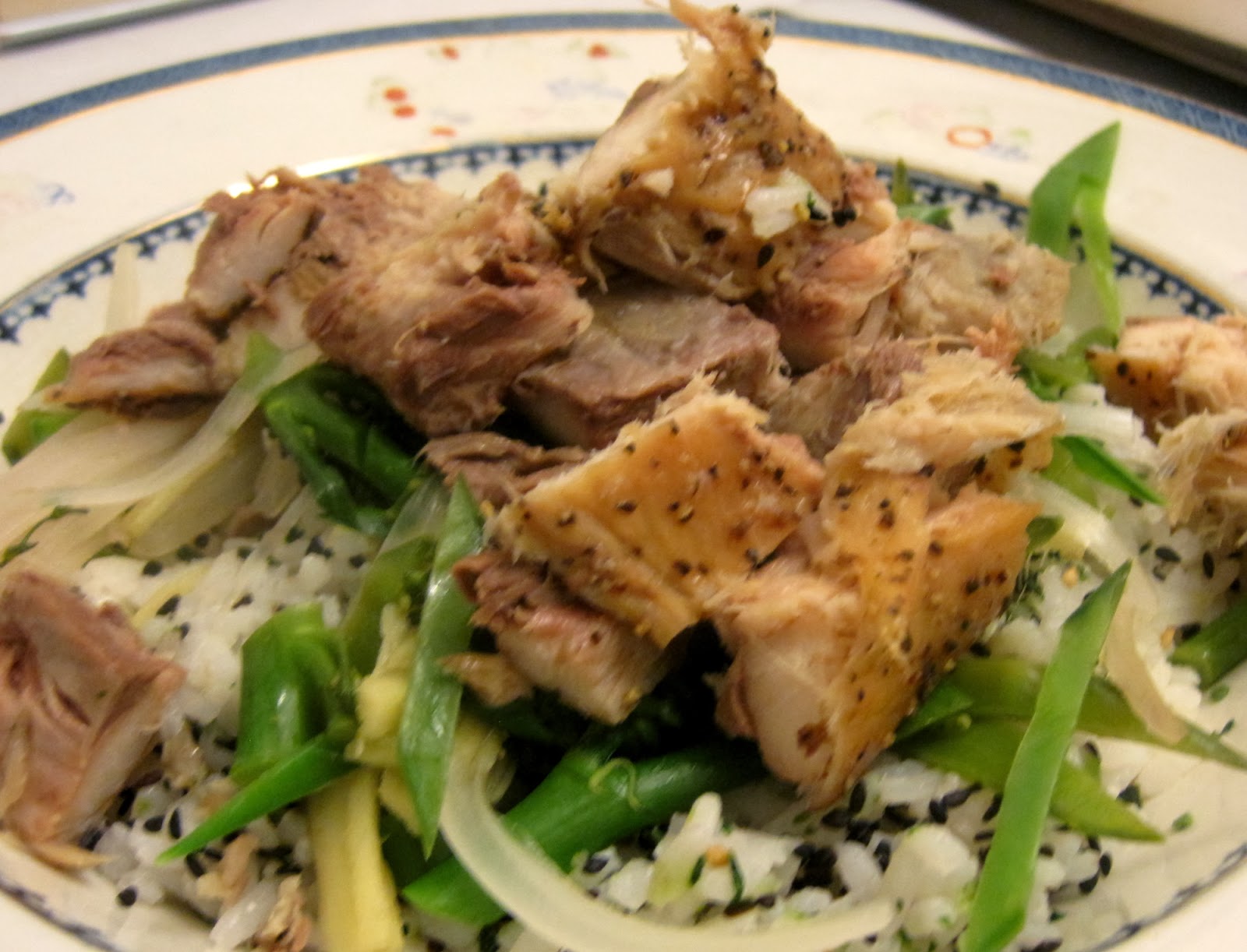 Firstly take one mug full of sushi rice and rinse thoroughly until the water runs clear, Put into a saucepan and add one and a half mugs of water. (It doesn't really matter what you use to measure, it is the proportion of water to rice that is important. This gives plenty for two to three people) Don't add any salt. Bring to the boil then cover tightly and reduce the heat to a tiny simmer. Cook for around 20 minutes until the water is all absorbed, then leave to sit for 5 minutes still covered. Apart from checking towards the end, don't open the pan or you will let all the steam out.

Whilst the rice is cooking, shred half a pack of mange tout, cut a sweet onion and a thumb of ginger into slivers, and break some tenderstem broccoli into sprigs.   When the rice has been turned off, put a little water and a spoonful of mirin and of sushi vinegar into a small frying pan and bring this to a boil, add the vegetables and steam for a few minutes.

Put the rice in a bowl, shake some furikake over the top (or finely snipped nori seaweed if you don't have any) and a shake of black sesame seeds. Top with the vegetables and their residual liquid, and then with the cold mackerel. 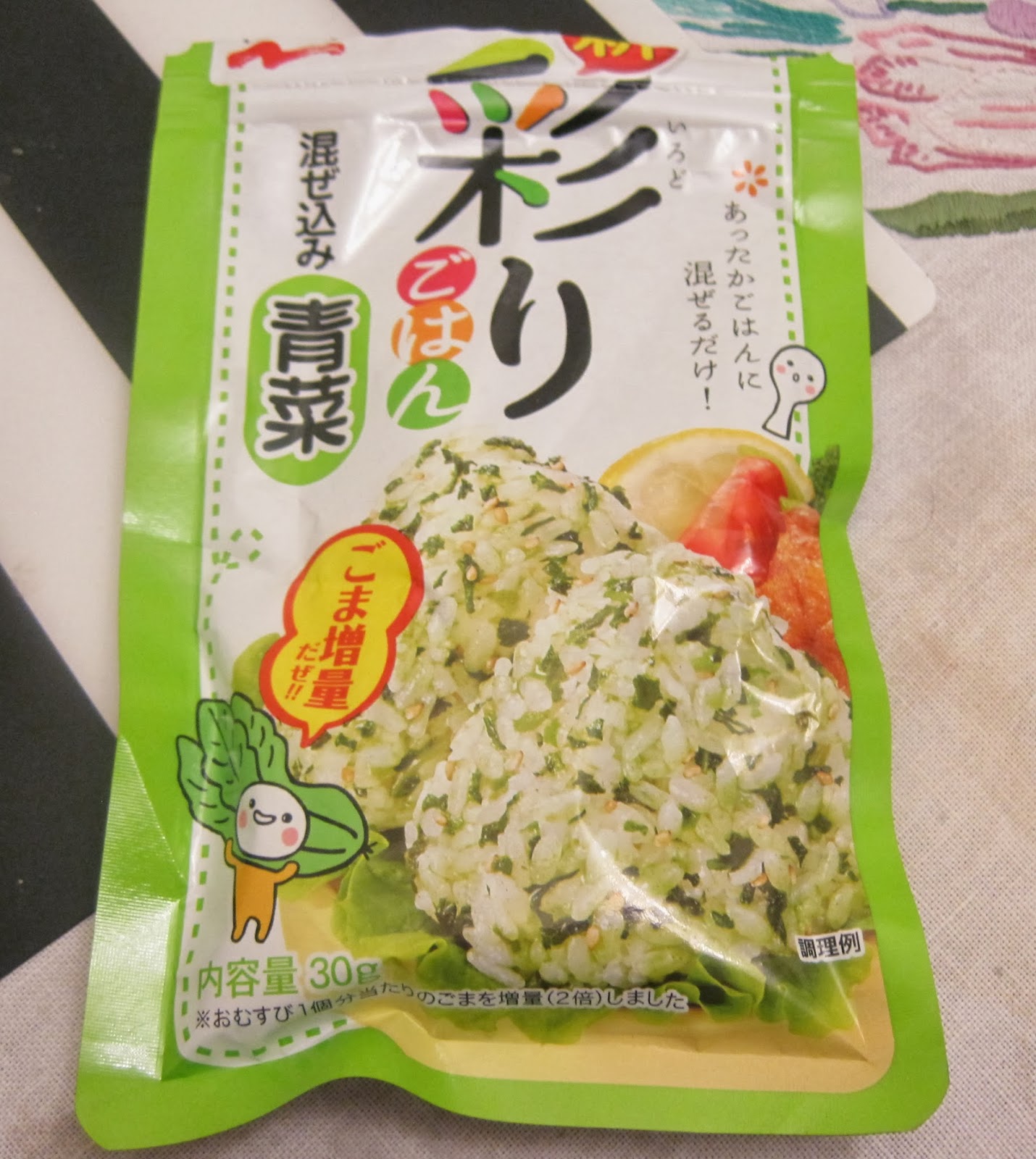 By the way, Japanese people, do you have any idea what is in this furikake that my neighbour brought me back from Japan?

It is very very good with the mackerel.

Oh Lynne! you are supposed to be keeping away from fat.. how can you fry food and not be suffering?  Well do you think these fillets look oily and greasy? NO! 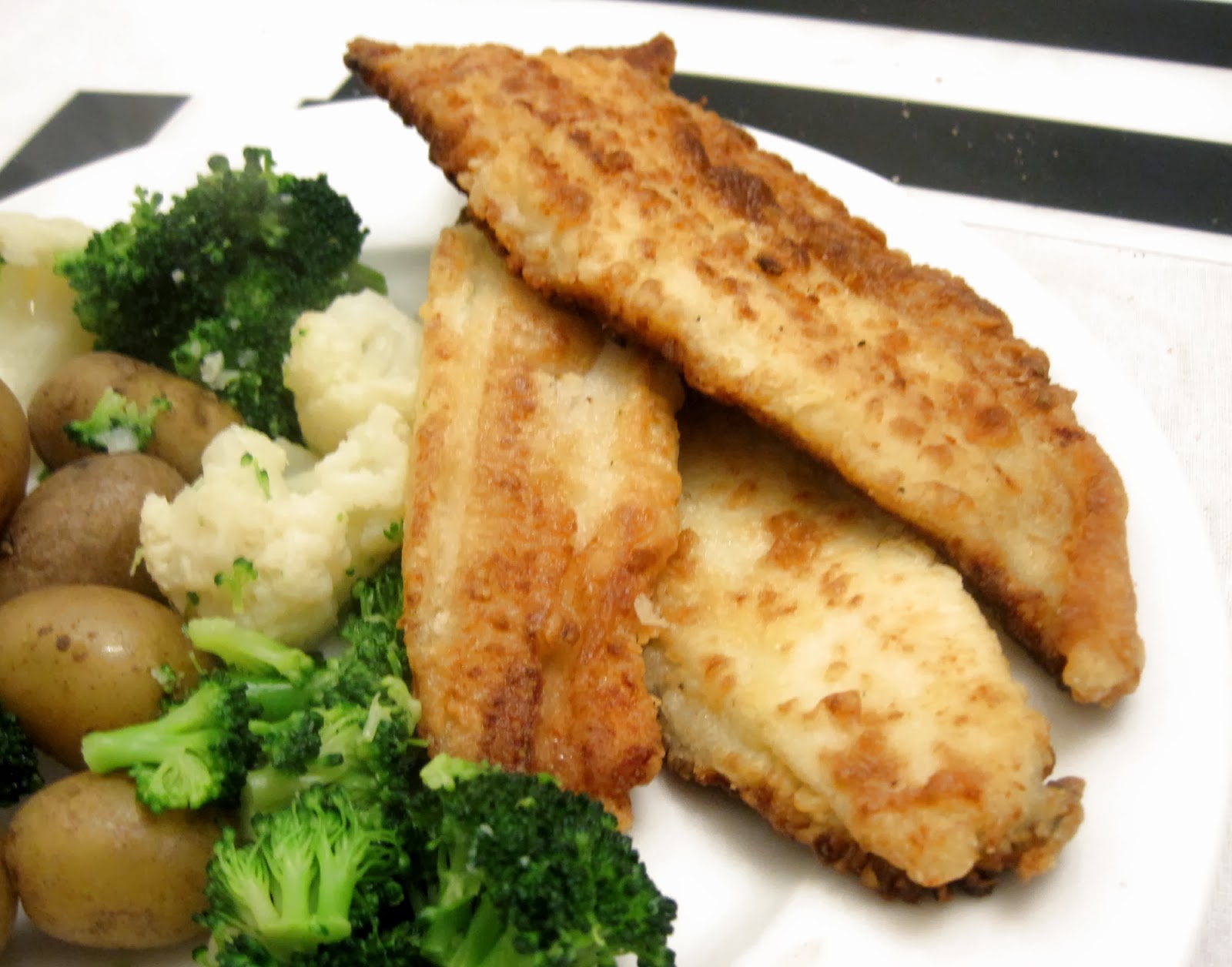 Just make sure your oil is at the right temperature.. if it is hot enough it will seal the flour so that it doesn't absorb any oil, and then the paper kitchen towel you lay them on after frying will wick away the rest. Cold oil means the flour just sucks it all up and you get yucky oily greasy fish. Yuck.

This is just three supermarket lemon sole fillets (for the two of us) , each cut into two pieces, dipped in well seasoned flour,  then into a frying pan with about an inch of hot hot oil - I use organic rape seed oil, it doesn't degrade at high temperatures the way that olive oil does. Test it with a little piece of bread, you want it to go golden and crisp in about 20 seconds, and you should see lots of little bubbles around the bread.

Lower the fillets into the hot oil away from you, so it doesn't splash you, and put them in top side first. Keep an eye on them and when you can see that the coating is good and golden all around the edges, then flip over carefully. Give the other side a couple of minutes and you are done.

I served this with simple boiled new potatoes broccoli and cauliflower florets, and a little dish of Total 0% Greek Yoghurt tartare sauce on the side.  And a wedge of lemon that I had forgotten about when I took the photo!
Posted by josordoni at 16:27 No comments:

Easy All In One Chicken

I am starting to get just a little fed up of chicken. But this way of cooking is rather delicious and not at all boring, so maybe I'll manage not to throw it at a wall just yet... 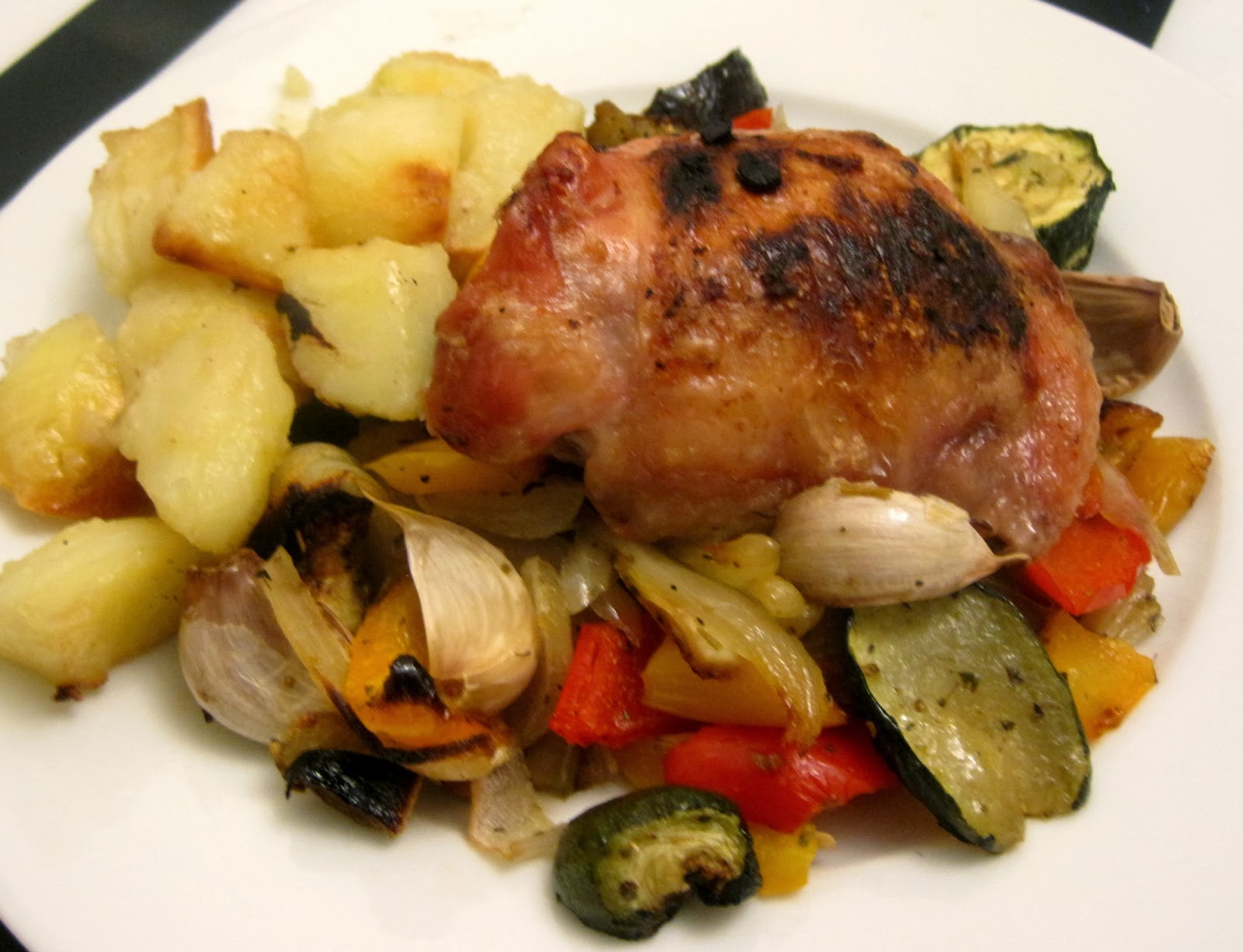 It's so easy. First of all, chop potatoes into fat chunks, a bit smaller than roast potatoes, but not so small they don't have an inside to stay soft whilst the outside goes crispy. I'm not going to give you quantities, it depends on how many of you there are, but I use two medium potatoes per person if I'm hungry.

Parboil your potato chunks for 5 minutes then drain and allow to steam dry.  Put the oven on now to heat up as high as it can get.

Meanwhile, (quantities for 2 people... multiply up or down accordingly) chop one red and one yellow pepper, two courgettes and a large sweet onion, and put in a bowl with a slug of olive oil, salt and pepper and a nice shake of Mediterranean herbs, or oregano and thyme mixed if you don't have the Med herb blend.   Mix this up well.

Now, and only now (and this is a gooooood tip) add a cubed aubergine. Don't add any more oil, just mix it into the rest of the veg and the aubergine will take up the excess from the already anointed veg, but won't suck it all up so they don't get a chance.

Take a wide flat oiled baking tray (or two or three depending on how many of you there are, and how generous you have been with the veg) with a shallow lip, put the med veggies in the middle, the potatoes around the outside. Drizzle the potatoes with olive oil and season them. Scatter whole unpeeled cloves of garlic over the lot.

In the middle, make hollows for your chicken thighs (one fat big one per person, or more if you are hungry!) and nudge them into the vegs - add a lemon cut into 8ths and tuck that in round the chicken. Season the chicken.

If you find you just don't have enough room, as you have so many veg, then put the potatoes in a separate pan with a little oil and some herbs and bake separately.

Put the tray(s) into the preheated oven, turn down slightly (to about Gas mk 7) and bake for an hour, switching the trays over half way through if you have more than one. Keep an eye on the trays and turn the veg if you think they need it.

Posted by josordoni at 13:06 No comments:

still on the chicken...

We are eating a lot of chicken... luckily I like chicken, and it seems to suit my innards at the moment. Small portions of skin, and in fact small portions generally, just one thigh makes a portion these days. 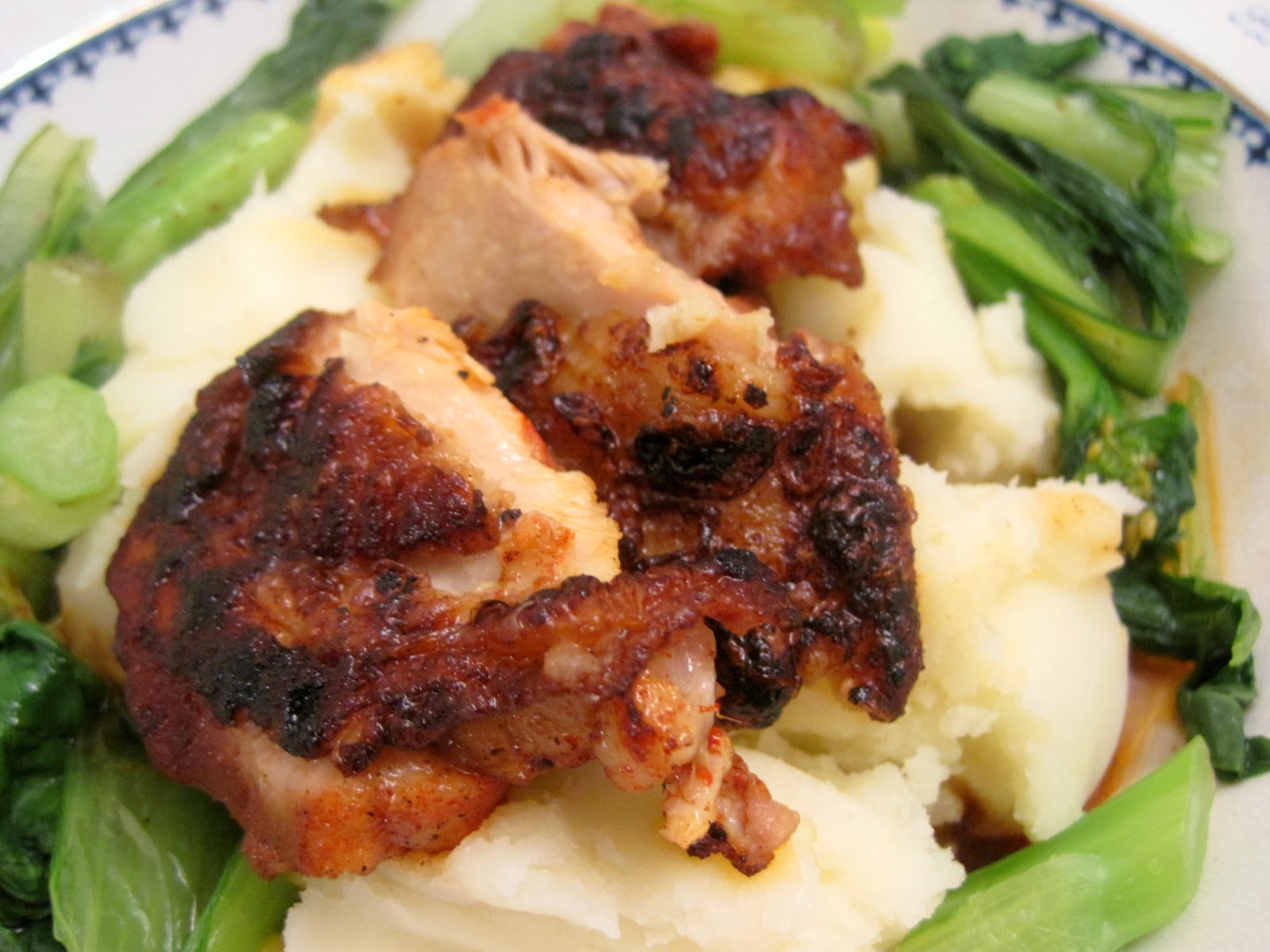 This was gorgeous. I boned and scored the flesh side of the chicken thigh, and rubbed both that and the skin with agrodulce smoked paprika.. (if you find this version of Pimenton dela Vera, do get it, it is smokey, slightly bittersweet, not hot but with a spicey undertone.  Totally delicious and it makes the kitchen smell wonderful).  I heated a little oil in a pan until smoking hot and fried the skin side first, then the flesh side. I like my chicken skin very crisp, so I finished it off under the grill, and then, whilst it rested, deglazed the pan with a little dry sherry.

I had some chinese pak and bok choi in the bottom of the fridge, so I chopped that up and steamed it with just a sprinkling of salt. There is an amazingly delicate texture and flavour to these chinese cabbages, they don't need to only be used in Oriental cooking, you can use them anywhere you would use English cabbages.  Some mashed potatoes, the juices of the chicken, and the cabbage. Simple, low(ish) fat - lower if you don't eat the skin of the chicken - and totally delicious.
Posted by josordoni at 22:55 No comments:

A Greedy Piglet is moving.

I am going to move A Greedy Piglet over to the Blogger platform I think, as people seem to like the format better. What would you like to see as features on the new style blog?

Come over and have a look, and leave me comments as to what you think. Do the colours work? Are things in the right place to find easily?

The new blog will be here

I hope you like it!
Posted by josordoni at 18:05 No comments: