I am really really partial to a Thai curry, and thankfully, Bob, who dislikes Indian curries intensely, and doesn't like coconut in anything other than milk form, also loves them.

So for Chinese New Year, we didn't eat Chinese, instead we just stayed in that side of the world and ate Thai chicken curry, with boned skinned chicken thighs, red peppers and cubed aubergine.

It is lovely and quick, only taking about 20 mins in total. The chicken is poached in the aromatic broth of coconut milk, red Thai curry paste, garlic and ginger paste, finely sliced kaffir lime leaves, lots of fish sauce and sugar.   The veg are added in at the same time as the chicken, and it is finished with chopped fresh coriander and lime juice.

I like to serve it with the rice in a separate bowl, so I can taste the clean flavours of the curry and then have a mouthful of rice. 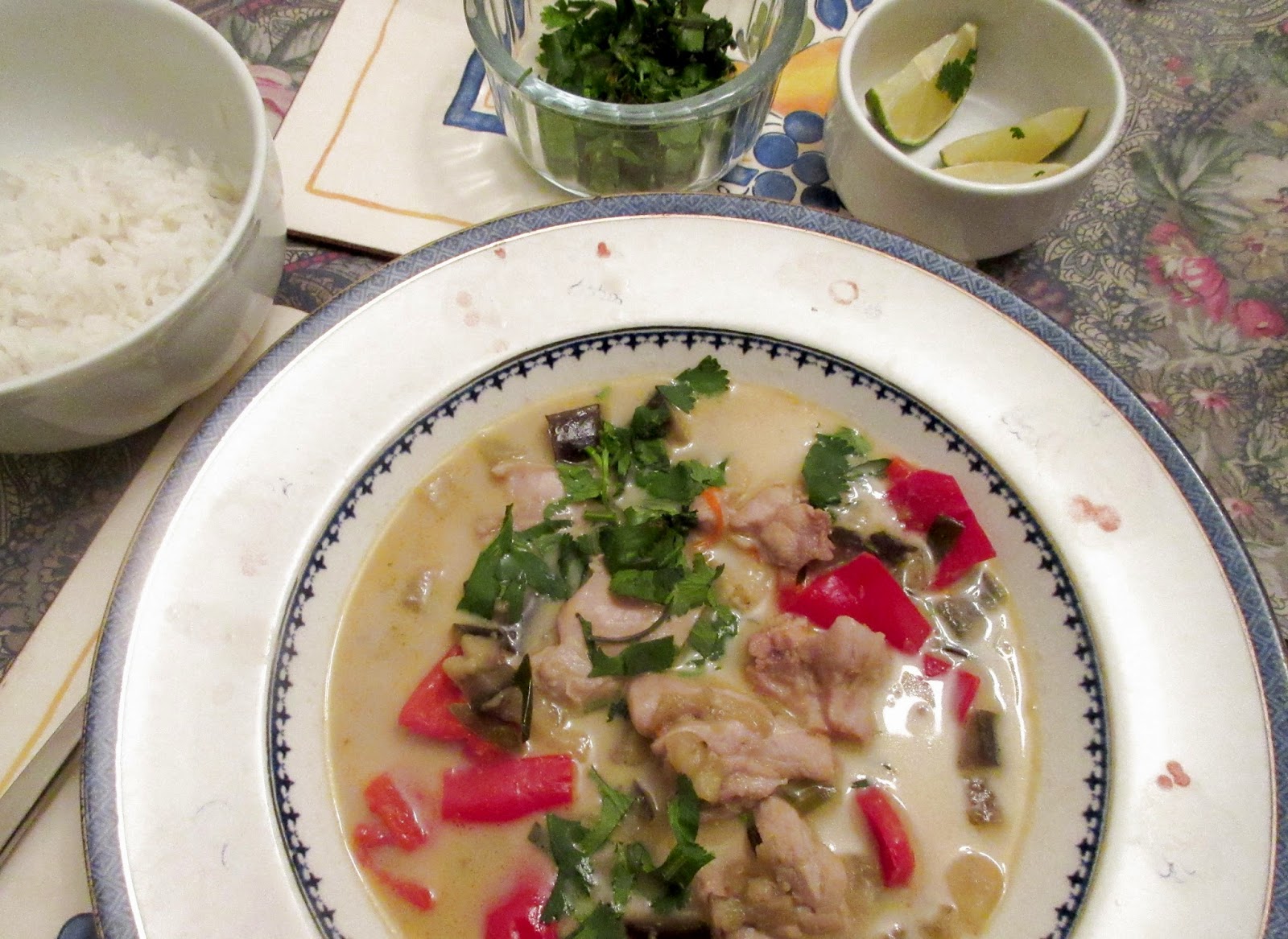 Posted by josordoni at 15:30 No comments:

Another one tray Mediterranean dinner.. with pork meatballs and olives

That one tray Mediterranean veggie & sausage dinner from yesterday's post was so easy and successful, I returned to the tray and the veggies again. I had only used 6 sausages out of a pack of eight, so took the last two sausages out of their skins, mixed the sausagemeat into some pork mince and seasoned with thyme and smoked agridolce paprika, made the mix into meatballs and scattered over the outside edge - the centre cooks less than the outer edges in my oven, so I try to keep the centre only thinly covered. 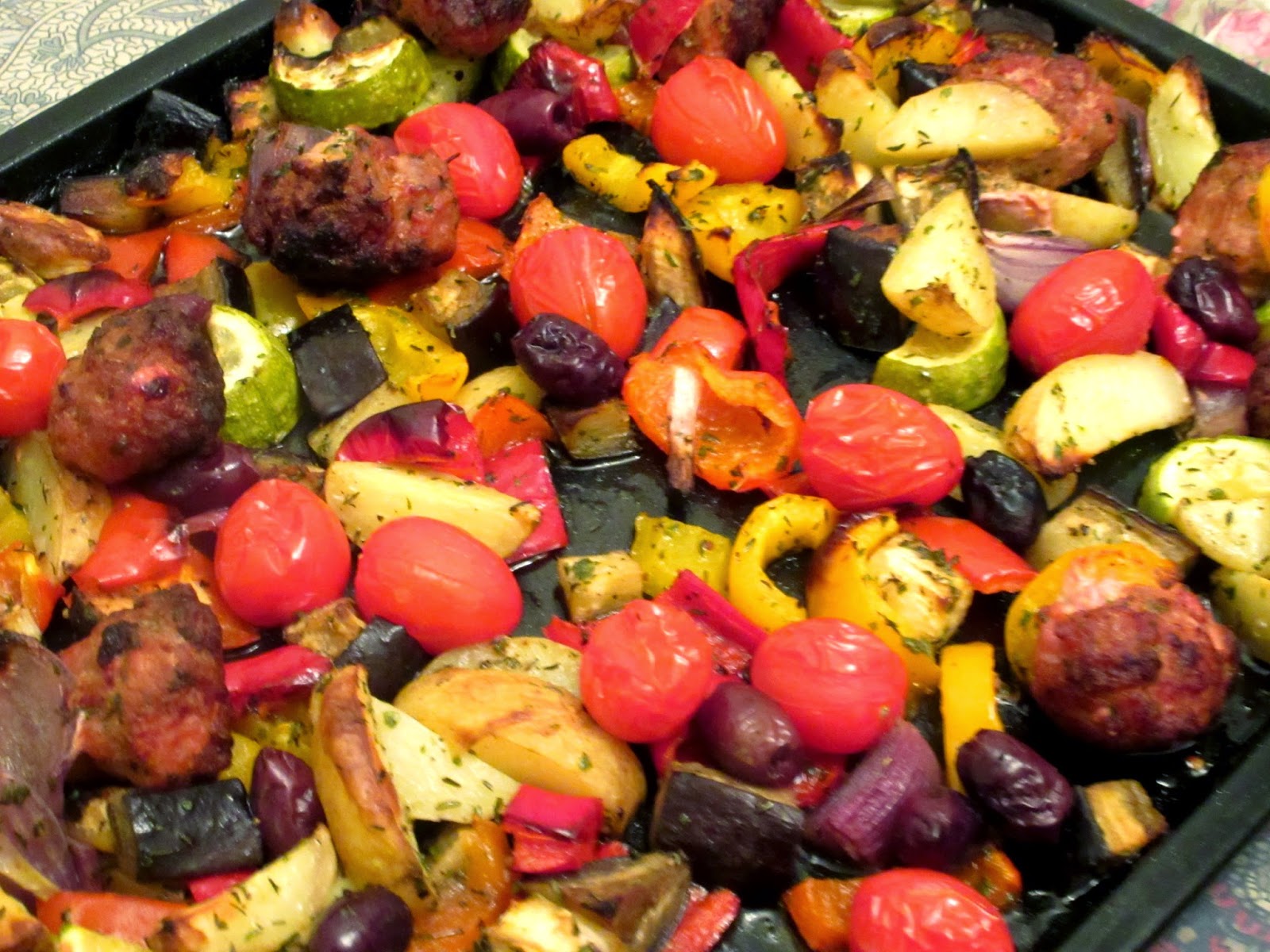 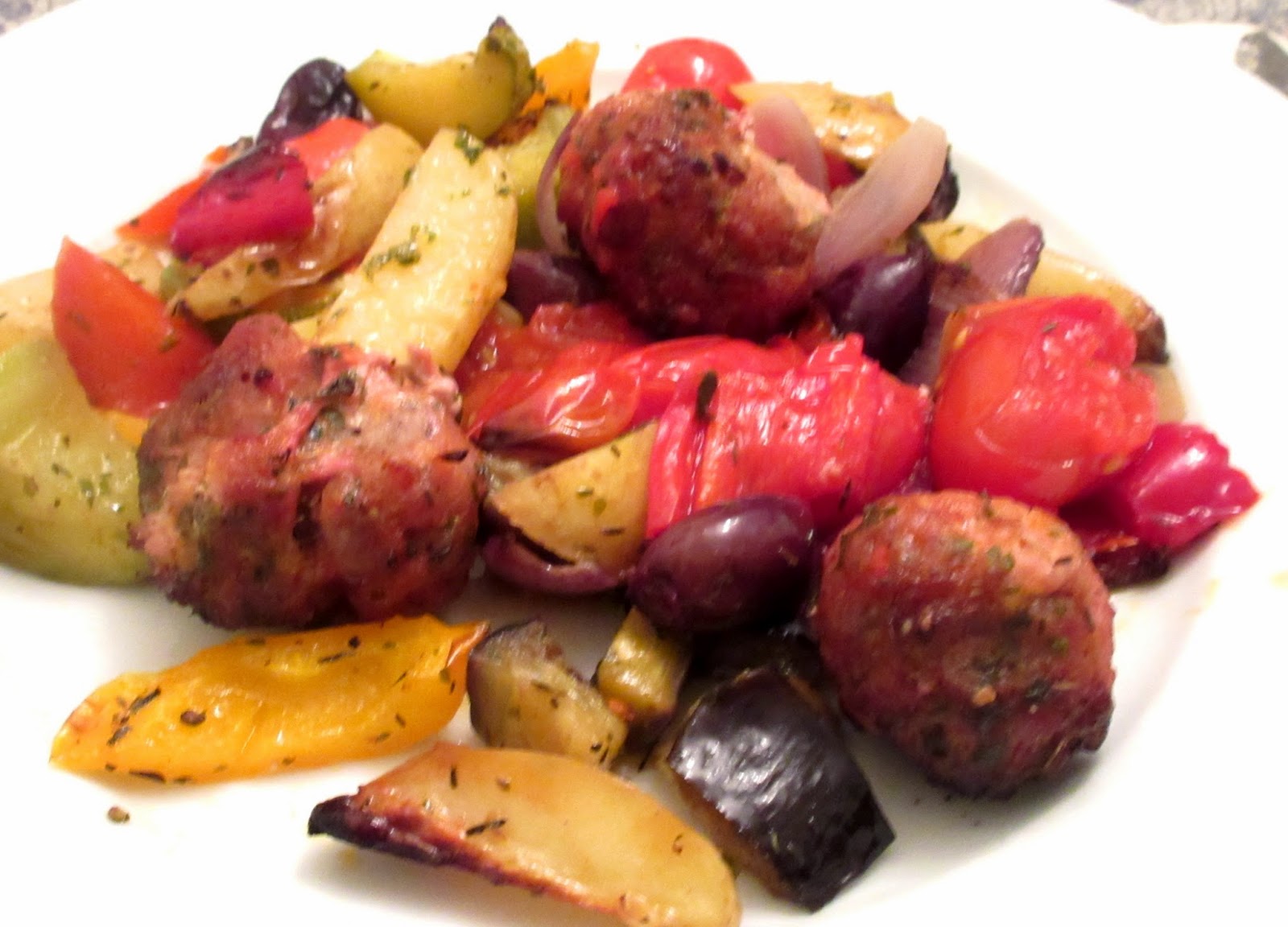 Posted by josordoni at 11:44 No comments:

Just chuck it in the oven...Sausages and mediterranean veggies

One baking sheet. One dish to wash up... 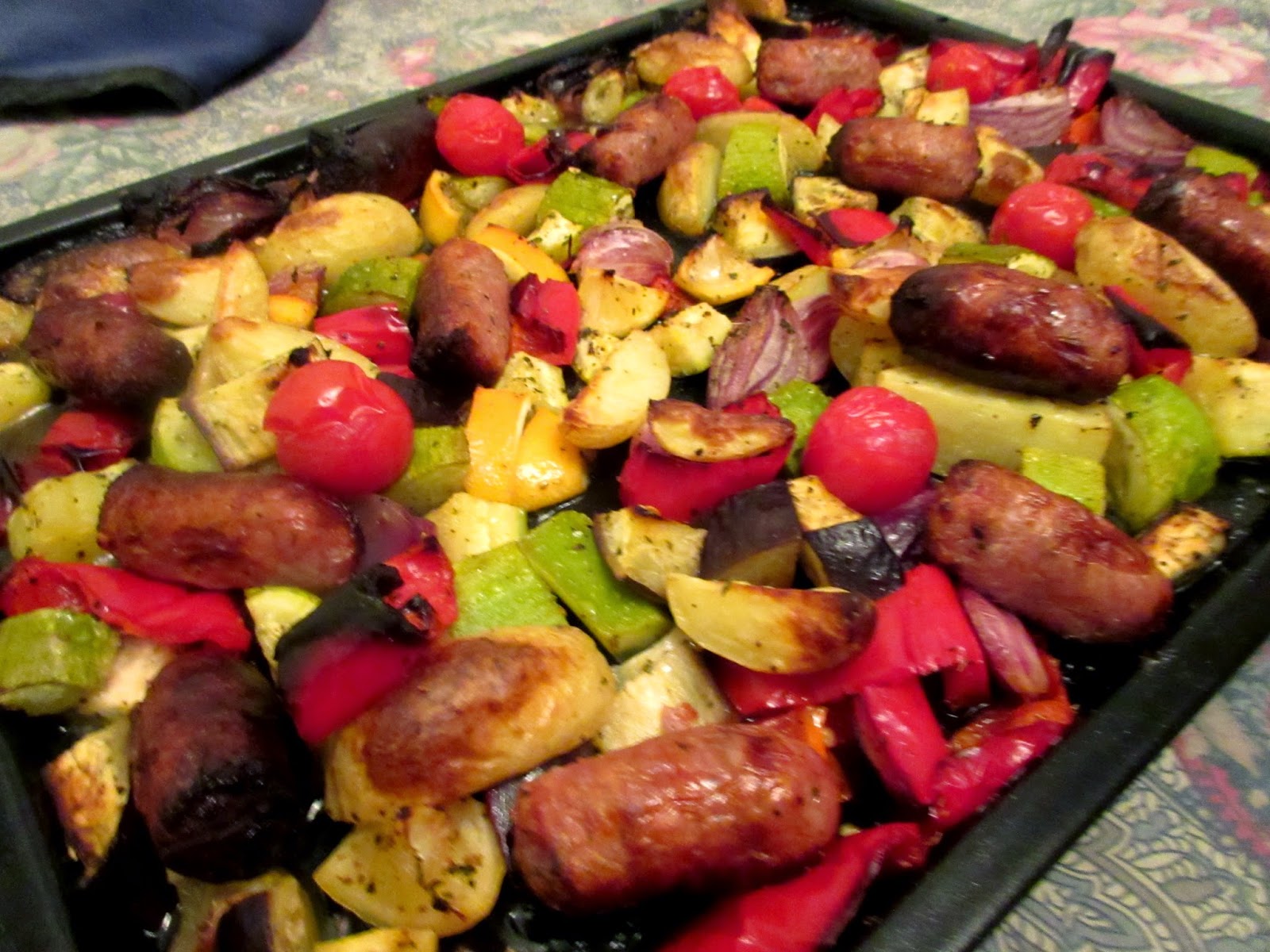 Sausages, peppers, courgettes, aubergines, onions, garlic, new potato wedges, chopped lemon. Tossed in olive oil, salt and pepper, dried oregano. Onto the tray, into the oven at Gas Mk 7 (HOT) 40 mins, then scatter a few cherry tomatoes over the top, 10 minutes more and onto the plates. 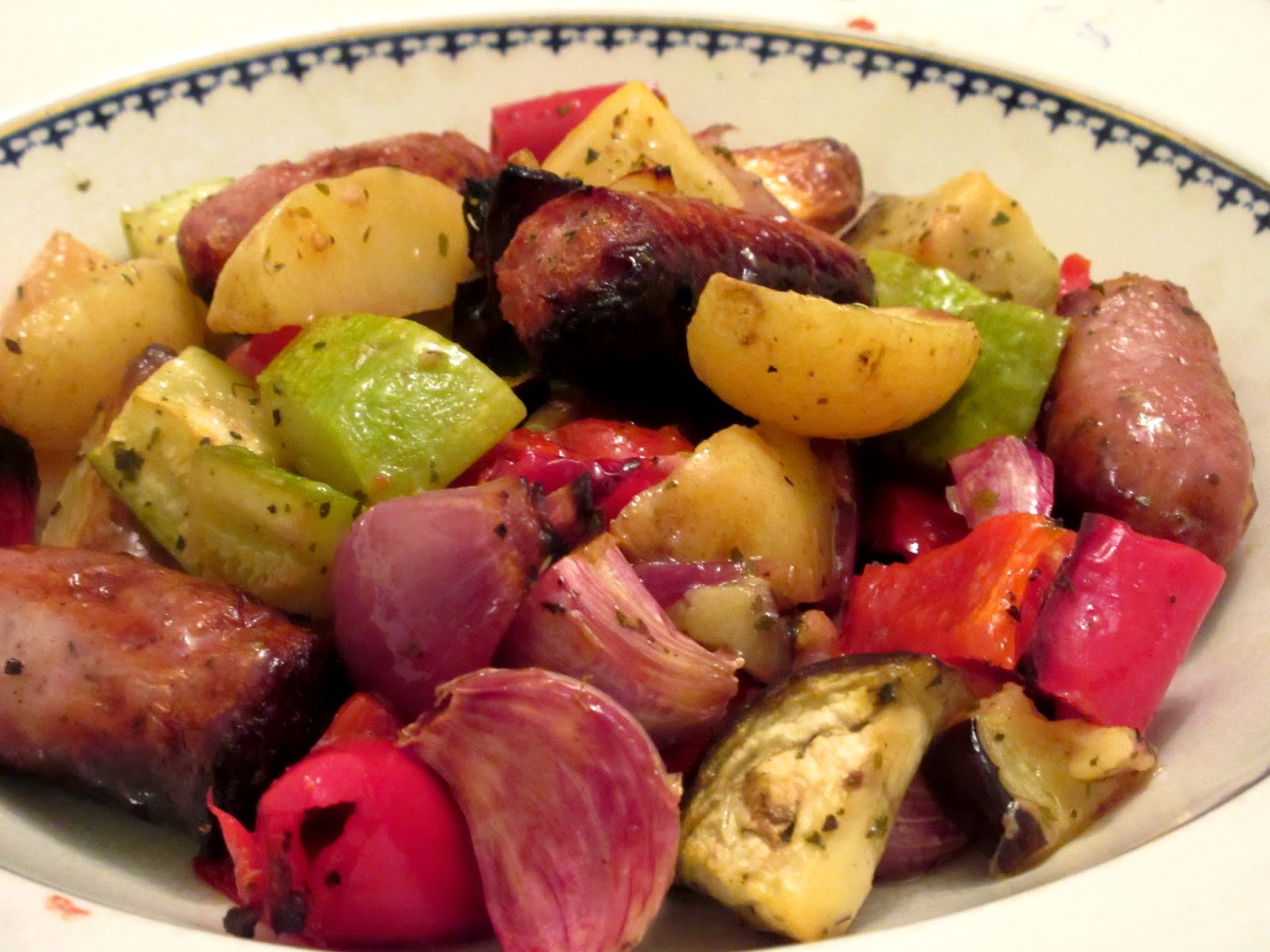 We never go out for dinner on V Day, far too crowded with lovey dovery people who will probably have a row about the sheer expense of it all on the way home and spend the night on the sofa (well one of them anyway) ...

I like to cook something a little less basic on special days. Not restaurant-y, I can't plate up the way that my favourite restaurants can, so I just try for lovely flavours and something to go with a rather more expensive bottle of wine :)

Last night, we had smoked haddock (Bob's favourite fish) with wilted baby spinach, crispy bacon and roasted baby plum tomatoes.  Easy peasy, light as a feather and very delicious.   (the bacon was a bit over crisped, not quite burnt - though it certainly looks burnt in the photo!) 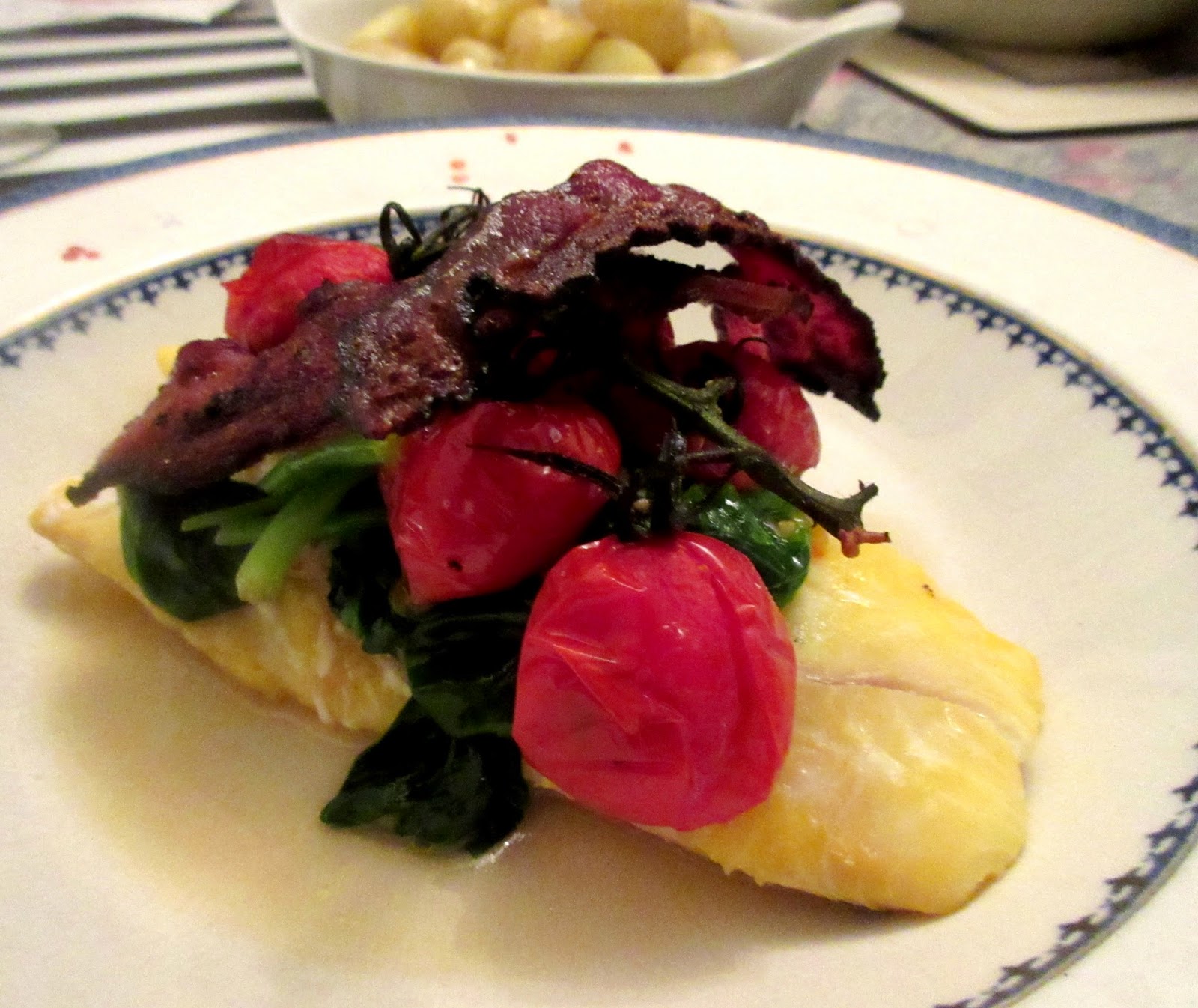 and for afters.. a luscious South African Peach Melba. 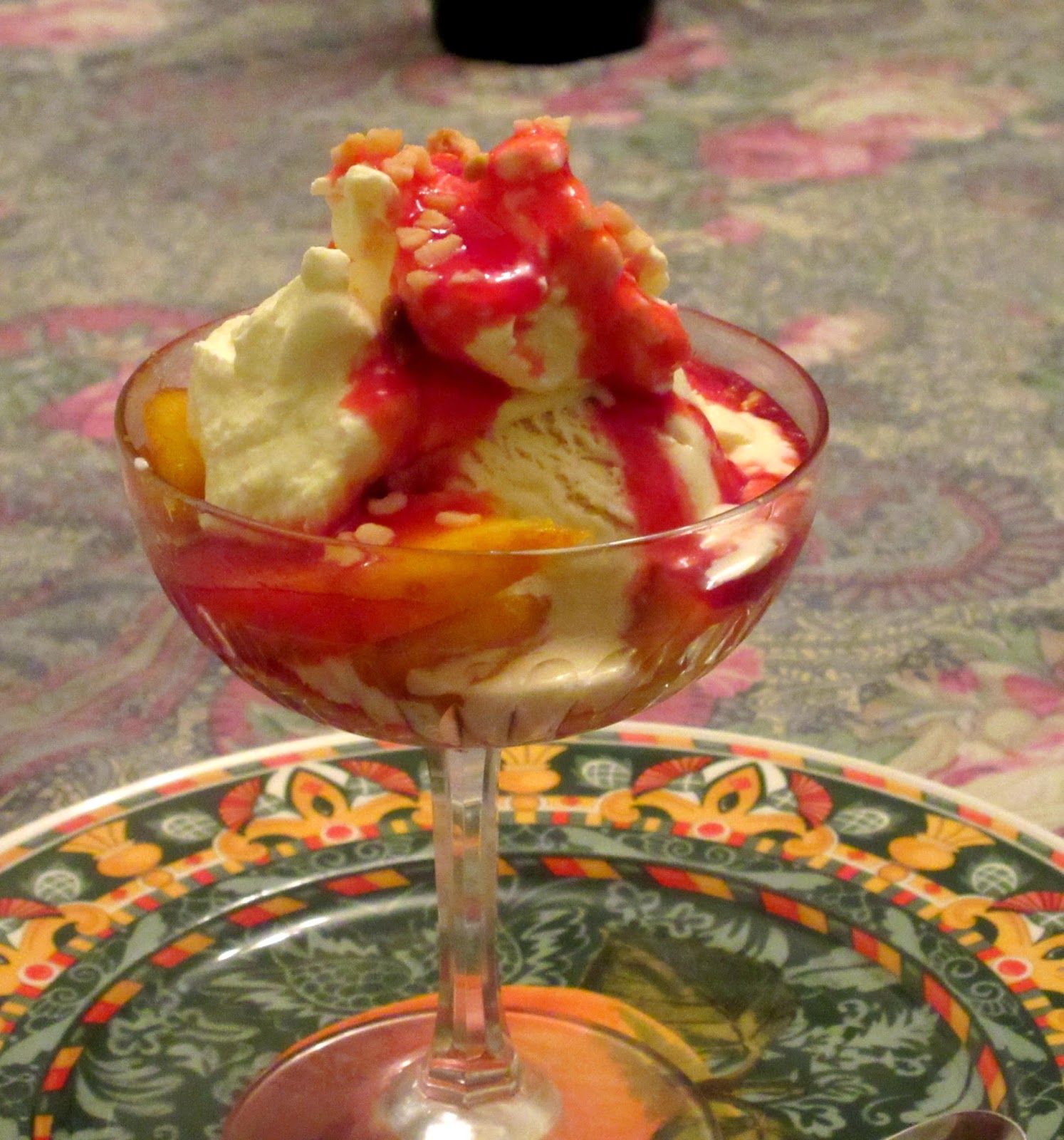 Traditionally, the peach is served as a full half peach over the icecream, but I find that my spoon slides off this too easily, resulting in the peach-half skidding across the tablecloth. So I like to chop half a peach to put in the bottom and then slice the other half to go round the icecream. A blob of whipped cream or Greek yoghurt on top, a drizzle of fresh raspberry coulis and a sprinkling of chopped roasted hazelnuts.

I could eat it all again right now!

I don't use my slow cooker often enough.... I am not at all organised and forget until it is too late.  But this time, it all went to plan.

At the weekend, I found some veal rib bones at Lucy's Veal at Walthamstow Farmers' Market.  Not much meat on them, not enough to make bbq ribs, but they were exceedingly cheap and perfect for enriching a stock to cook root vegetables and pearl barley for soup.

The bones were too long for the slow cooker, so I hacked them in half, and then stacked them in the cooker with carrots, swede, onions, celery, turnips , a teaspoon of salt and a fat little bouquet garni of thyme, parsley and bay leaves.  I covered this with water - probably a good couple of litres, but I didn't measure it, I just covered the ingredients.

I left this to simmer on the high setting for around 6 hours.  The meat slipped off the bones now, so I took the bones out, removed the meat, flaked any edible meat from the cartilage, and added that back to the stock.  In the meantime, I had been soaking a mug full of pearl barley, and now added that into the pot with a drained can of butter beans.  I checked the seasoning.. it was rather light on meatiness so I added a couple of teaspoons of Essential Cuisine Veal Stock powder, which beefed (or rather vealed..) it up nicely.

I used some of the veg and pearl barley as a side vegetable dish for some roast chicken. 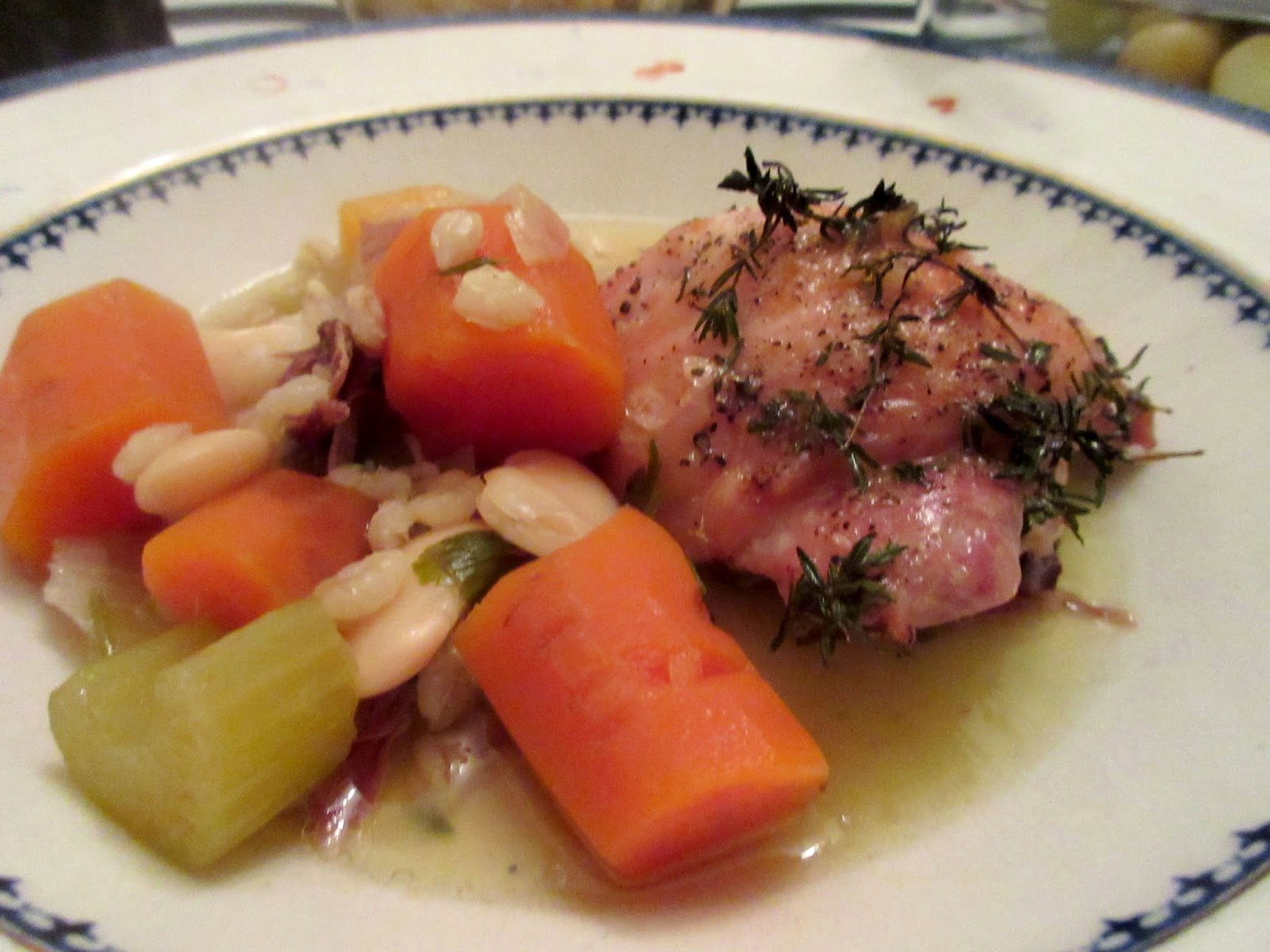 Then mashed some of the veg into the stock to make a delicious thick brothy soup for lunch the next day. 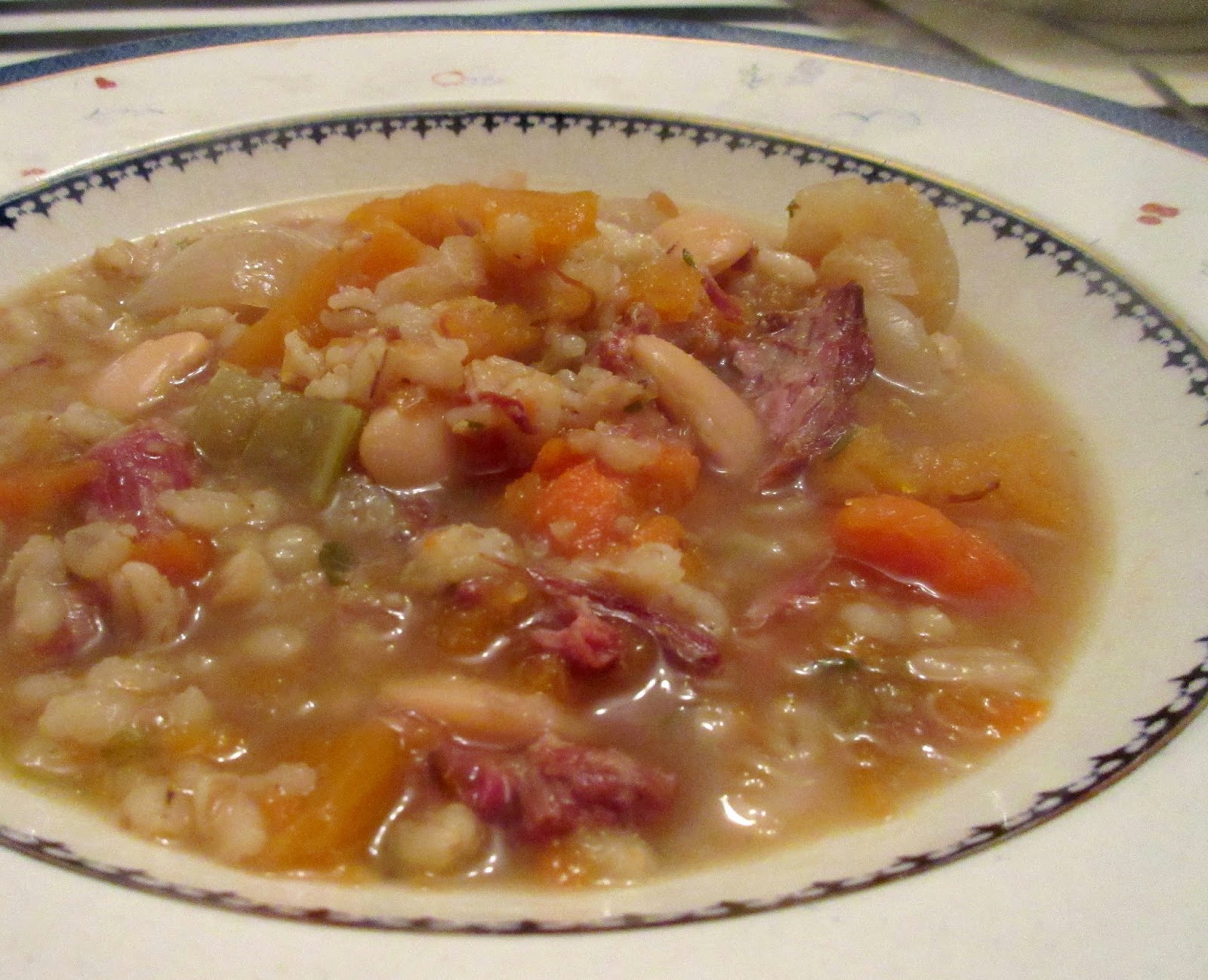 Deliciously easy and I have loads left. I shall be eating soup for days!!
Posted by josordoni at 14:00 No comments:

Simple Sausages and Mash.... nothing wrong with that!!

I've been lazy about putting pics up of the very simple dinners we have most of the time, but I really shouldn't be ashamed of basic food. There is nothing wrong with bangers and mash is there? 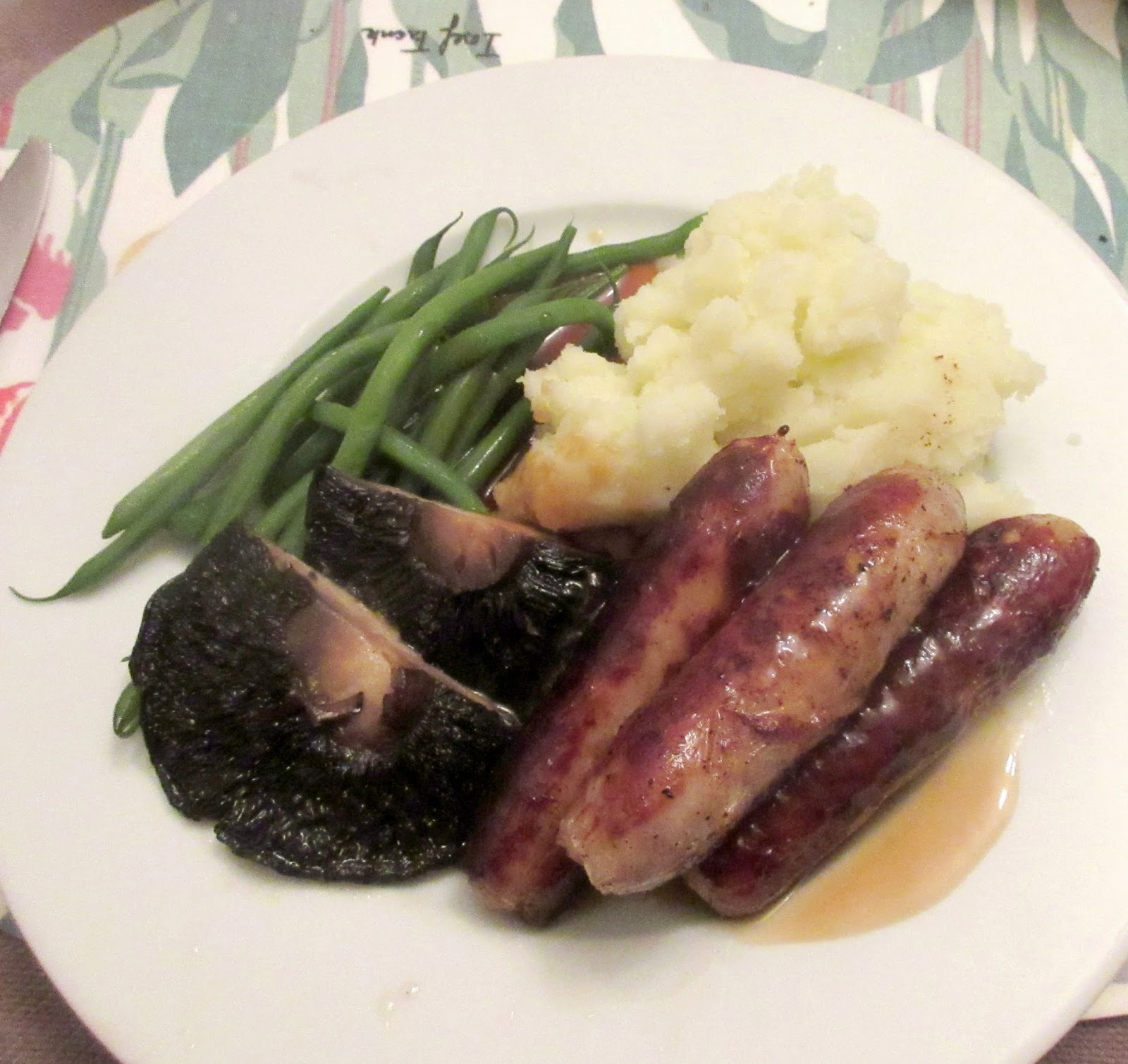 Posted by josordoni at 11:41 No comments:

Family to dinner on Sunday, I fancied pulled pork with a lovely smooth spicey bbq sauce.  But my usual bbq recipe is too rich and tomato-ey for pulled pork, I wanted something with more zing and more vinegar.  My fab foodie friend Helen from The Foodie Gift Hunter suggested her go-to recipe from Heston.

I NEARLY kept to his recipe, I didn't add in the golden syrup, and cut the sugar back a bit. And I gave the meat (a 2kg shoulder of pork, the skin removed rather than his shoulder steaks)  an initial blast in the oven to give a bit of colour to the fat, then moved it to a slow cooker and cooked for 3 hours on high, followed by 2 hours on low. Then back into the oven to crisp the fat further, and I tipped the juices into a saucepan and reduced them to a nice sticky glaze.

Gorgeous! Lots left over for Monday night too. 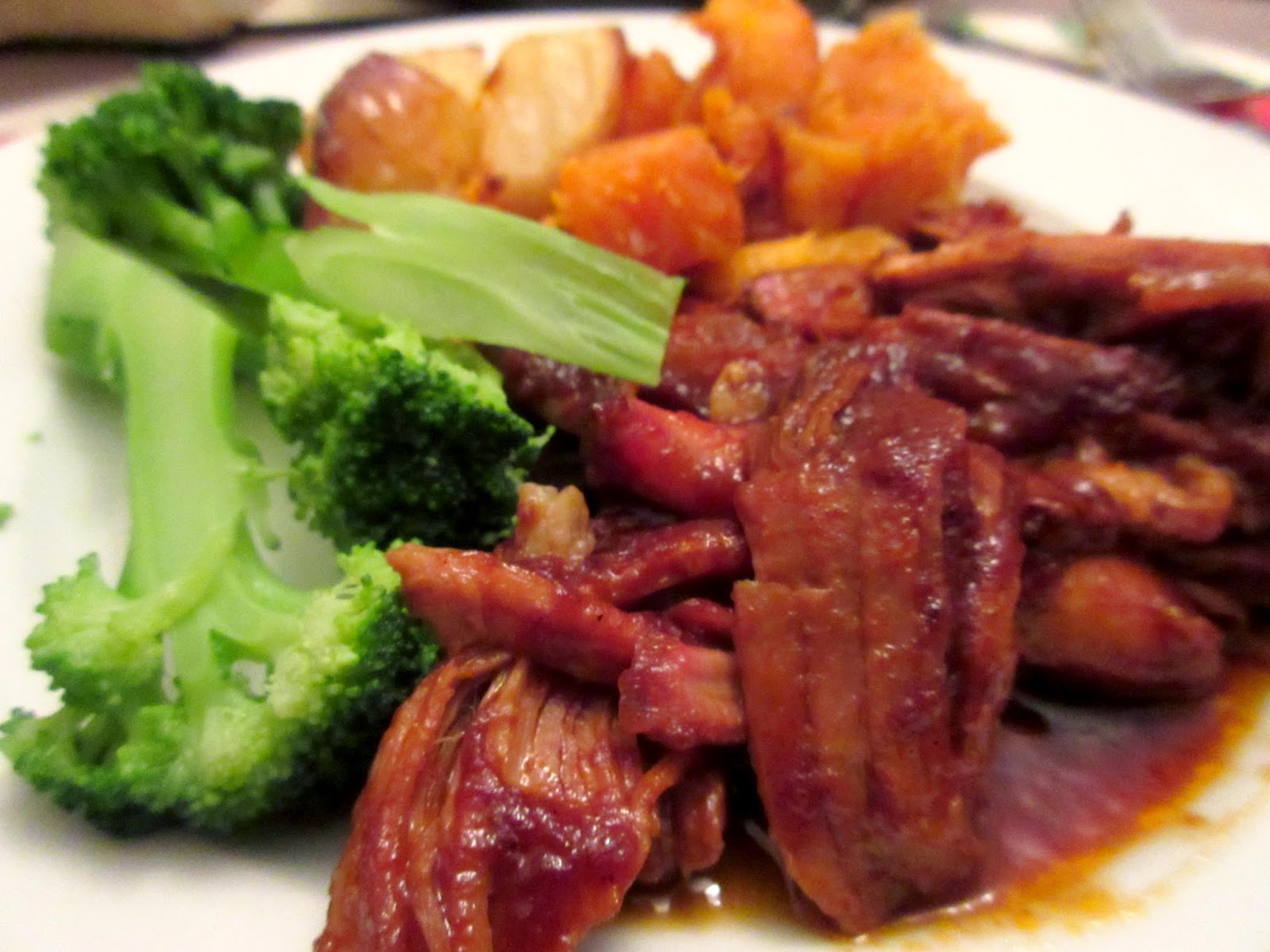 Posted by josordoni at 17:36 No comments: